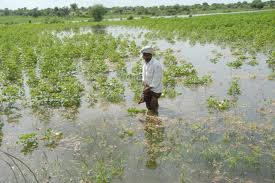 The peasants of Jamshoro district on Tuesday demanded the government to compensate the flood affected people of katcha areas, as they’ve lost their shelter and crops standing on hundreds of acres of land.

They were speaking at a peasants’ seminar on ‘Land Reforms and Sustainable Agriculture’, organized by Pakistan Fisherfolk Forum (PFF) here on Tuesday.
The event attracted hundreds of peasant women and growers too, hailing from different villages of the district to attend the event and display the unity amongst them.
Many of them were from the flood-affected areas.PFF Chairperson Mohammed Ali Shah while addressing the farmer crowd asked them to adopt a traditional methodology of cultivation to increase crop product, and save the soil fertility, which is under threat due to excess utilization of genetically-modified seeds, pesticides and fertilizers.
“It’s time to realise that multinational companies are inducing landlords to adopt harmful practices, which are hazardous to health, destructive for soil fertility and affect the overall ecology,” Shah said.
He asked the peasants to strengthen their campaign to get a proper share of their crop product. Shah added that besides showing unity against oppressor landlords, it is also the responsibility of farmers to protect the environment and natural resources through adopting best practices in the agriculture sector.
“Your enemy (the landlord) is powerful, enjoying political support, hence bridge unity and fight together for safeguarding the rights,” he said, adding that the land reforms claiming successive political governments have done nothing, but benefited their well wishers.
Mustafa Meerani, Mir Mohammed Pirzado, Suhail Siddiqi, a community elder Baradi Shoro, Mohammed Mallah, Mohammed Mithal Zardari, Mir Hassan Mari, Azad Meerwahi among others also spoke on the occasion.
Shah said the farmers should respect the law of nature, and should never bow down before the multinational companies, who wish to destroy the natural resources of the entire world, especially the developing nations.
“We have to follow the rule of nature, like Sufi Shah Enayat, who declared long ago that ‘those who cultivate land, should own that piece of land.’ This philosophy should be adopted by the farmers of Sindh to have their own pieces of land,” he said.
Mir Mohammed Pirzado, former agriculture officer, depicting the sustainable agriculture and causes of the soil infertility, advised farmers to approach agriculture laboratories available in all districts to check the soil for suitable crops.
He argued farmers should know about the natural seed, and avoid chemical fertilizer and adulterated pesticides.
Zawar Faiz Mohammed, a local farmer, said the floods in 2010 had affected hundreds of people, who’ve not been compensated, so far, after passage of three-year period. “We have given votes to PPP candidates, but at difficult times, they always leave us at the mercy of disasters. Every year, we cry for help, but nobody comes to our rescue,” he added woefully.
Mustafa Meerani said haris were not against landlords, but should be given due share.
The speakers said land reforms through distribution of state land among the landless peasant families in transparent manner are “key to sustainable agriculture”.
News Source
Courtesy Daily Times
Tweet