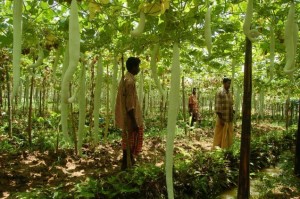 A campaign to promote organic farming to reduce the hazardous impact of pesticides was launched by a consumer rights non-governmental organisation (NGO).

TheNetwork for Consumer Protection will encourage farmers to adopting practices of growing organic food , the organisation announced on Friday.
The campaign is going to create demand for organic farming by sensitising consumers to opt for safe and healthy food, a statement issued by the NGO said.
“The campaign will target farmers, consumers, policymakers as well as the Ministry of National Food Security and Research to adopt higher standards for the availability of safe organic food items,” said TheNetwork Executive Coordinator Nadeem Iqbal.
Iqbal said the campaign will raise awareness among the farming community to end the use of synthetic chemicals and increase the demand for safe food for consumers.
Organic farming  excludes the use of synthetic fertilisers, pesticides and food growth hormones, according to the United States Department of Agriculture’s National Agriculture Library. Instead it relies on compost, manure and biological pest control for farming.
According to estimates by TheNetwork, on average 19 per cent of total pesticides used in Pakistan are concentrated in rice and around 12 per cent in vegetables and fruits.
TheNetwork claims the incidence of pesticide poisoning is high in the country and high maximum residue limits of pesticides have been detected in foods.
According to the NGO, around 220,000 people die worldwide annually as a result of pesticide poisoning and around 90 per cent of these deaths occur in developing countries like Pakistan.
Most pesticides and synthetic fertilisers used in the country are regarded as extremely hazardous by the World Health Organisation, TheNetwork said, and their accumulation could lead to diseases such as cancer, skin and eye irritation, lung damage, infertility and diarrhoea.
International communities are leading towards the adoption of safe farming methods for food items, persuading farmers to reduce the use of pesticides and shift from synthetic pesticides to organic farming to prevent environmental degradation and health risks to the farming community.
News Source
Courtesy The Nation
Tweet