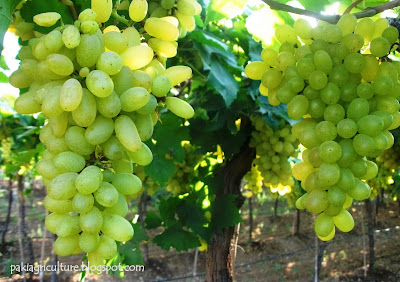 The European grape (Vitis vinifera) is the most important species of the family  Vitaceae. Two other commercial species are V.labrusca and V.rotundifolia.

OUTLINE OF THE TOPIC

Worldwide,grapes are grown for eating, wine, juice and raisins. Vinifera rapes have a thick skin which firmly adheres to the sweet pulp. American and Muscadine grapes have a thin skin which separates easily from the relatively acid pulp.

In Pakistan, only European grapes are cultivated for eating. Over 70% of the grapes are grown in Balochistan, while there is some acreage in Khyber Pakhtunkhwa.

Grape is one of the most remunerative summer fruit crops, native to warm, temperate zone between 34oN and 49oS

Mountainous and sub-mountainous areas up to 2000 m altitude or more are suitable for its cultivation. In Pakistan, grapes are grown over an area of 13,000 ha with annual production of 49.0 thousand tones. Its crop require long, warm, dry summers and cool winters for best development.

Grapes are produced on vines which are trained on wires running on both side of plant.

Leaf Buds: The buds develop in the leaf axils. Leaf buds produce only leafy shoots,while leaf buds produce shoots which also carry one or two flower clusters opposite the leaves.

Tendrils: Tendrils also develop on these shoots opposite some of the leaves.Labrusca grapes develop tendrils opposite each lateral leaf, which support the shoots by coiling around the wires.

Inflorescence: Inflorescences are produced laterally on the third or fourth node of one-year-old shoots called canes. 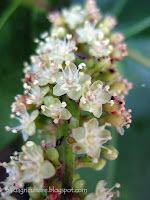 The flowers are usually complete and perfect, but male or female flowers are also found in some varieties. Each flower has 5 green sepals,5 greenish white petals, 5 stamens, and 2 carpels each containing 2 ovules. Blooming is followed by vegetative growth after dormancy is over.

Blooming is more rapid at temperature between 18 and 21oC and is retarted if the temperature reaches 37oC. Pollination, which is carried out by insects,takes place even in seedless cultivars. The fruit is a berry of variable size in each variety and is borne in clusters.

Grapes are well adapted to a great variety of soils,ranging from gravelly sands to heavy clays, from shallow to deep and from low to high fertility level. However,poorly drained or highly alkaline soils should be avoided. For good production, fertile soils with good structure which permit sufficient root growth should be selected.

Grapevines are deciduous and bear fruit under mild climatic conditions. They require a winter which is cold enough to fulfil their chilling requirements, but it should not freeze often. European grapes grow and bear well under a long,warm to hot,dry summer. This type of climate is found in Quetta Division of Balochistan. The failure of grapes cultivation in Punjab is largely due to the onset of monsoon weather during the ripening period. Only early varieties can be successful under these conditions.

Grapes are most commonly propagated from hard-wood stem cuttings.

Cuttings 30-40 cm long are made in late winter when wines are pruned. The cuttings are prepared by making a round cut at the proximal end and a slanting cut at the distal end. For better rooting the cuttings are callused by burying them upside down in moist soil in shade, but they can also be planted directly in well-prepared beds.Others methods of propagation are layering and grafting.

Grapeswines are planted in early spring at 3 – 3.5 m distance depending upon the fertility of the soil, climate, variety and the pruning system.

In Balochistan, grapes are planted in trenches prepared at a distance of 3-4 m apart. Normally manures are not frequently applied, but in commercial orchards addition of about 5 kg of FYM per bearing vine is desirable for the maintenance of health and yield.

Irrigation during the warm and dry season is required for satisfactory berry development. Irrigation during flowering and ripening is not advised as it may delay ripening, reduces berry size and increases shedding.

Pruning, which is done in the late winter, is the most important operation in grapes culture. Probably no other fruit plant is so severely pruned. Pruning gives the vines proper shape and a size which facilitates insect and disease control. It also keeps the fruiting wood near the main stem and well distributed all over the vine. Vines are trained to several systems, three of which are very important.