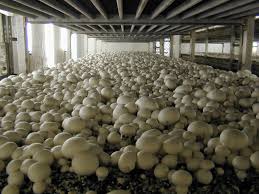 DEHRIWAL (PUNJAB): Overcoming problems like shortage of land or rising costs related to traditional crops, many farmers in Punjab’s Dehriwal Village, 35 kilometers of Amritsar, have taken to mushroom cultivation.

Mushroom cultivation is known to be a commercially valuable spore-bearing fruiting body of fungus.

Today, nearly 90 per cent of the families in Dehriwal Village with a population of 2,500 residents are engaged in cultivating White Button Mushroom between September and March, which is also the peak season for Mushroom crop.

An alumnus of Punjab Agricultural University, Subedar Sewa Singh has established a spawn production lab in his house to provide technical assistance and mushroom seeds to other farmers.

“One can get a minimum 40 per cent profit out of mushroom cultivation that makes it a lucrative affair. Marketing of mushroom is totally cash-based unlike other crops where most of the dealings are credit-based,” said Subedar (Retd.) Sewa Singh, a mushroom farmer.

The inputs for mushroom cultivation are mainly wheat straw, cattle dung, fertilisers and mushroom seeds which are readily available in the village.

Farmers with small holdings too can produce mushrooms, as large tracts of land are not needed for mushroom cultivation, said Baljeet Singh, another farmer.

“Many farmers here are successfully cultivating mushrooms. This village has many big and small farms. Landless villagers too can practice mushroom cultivation,” he said.

Inspired by the accomplishments of Dehriwal, neighbouring villages are also opting for mushroom cultivation.

Punjab Government’s Department of Horticulture is also assisting the farmers.

“We also provide mushroom farmers with technical assistance as and when needed. Inspired by the success story of this villages, other nearby villages too are adopting to mushroom cultivation. Women can opt for mushroom cultivation in a major way since it can be grown even in a kitchen garden, Singh added.