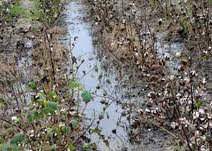 KARACHI: The textile sector of the country will have to face difficult times ahead as a result of heavy rains that damaged standing crops in Punjab and parts of Sindh cotton-growing belts.

This situation would increase the input cost and the textile products would become less competitive in international market before giants like China and India.

It would be difficult for textile products exporters to bear further burden of cost of production and would not be able to compete against international sellers.

Cotton and cotton products (textiles) make up for over 60 percent of Pakistan’s total exports.

The expected shortfall in the cotton target of 14.20 million bales for this season would affect the productivity and output of the textile industry as the sector’s cotton needs are around 15 million bales a year.

He said due to pest attack in some parts of the Punjab belt the growers have already faced the damage besides the shortage of pesticides to control virus has an added factor to the damage.

Punjab would face around four-maund less production per acre this crop season (average production is around 20-maund).

However, there is hope that the flowering of cotton plants in September when rains subside would bring some betterment and exact determination of the crop size.

A member of Sindh Agriculture Forum said late sowing in Punjab stations was also one of the factors that could lower down the yield per acre.

Mealy Bug damage to crop is the result of ignorance of the government pest control departments that has not taken timely steps to help the farmers controlling the damage.

The concerned government departments did not take any measure to control re-occurrence of the virus as a result the virus affected the crop four to five times more than last year.

Mealy Bug is considered to be a big threat to the cotton crop because it comes in three to four layers and the insect lays eggs and hatches them in a natural basket attached to its body. It multiplies rapidly as eggs are hatched in six-10 hours.

The bollworms and sucking pests also appeared in early August owing to humid weather. The shortage of insecticide to control these pests increased the damages of the framers.

According to agriculture department, it shows the use of fertilizer this year was 32 percent less than last year because of its shortage.

Heavy rains in the southern state of Andhra Pradesh and western state of Maharashtra led to some damage to planted crops, raising output concerns for soybean, cotton and pulses.

Gujarat cotton was damaged due to rains and 57 percent higher than the normal level. India is the second largest cotton producer and exporter.