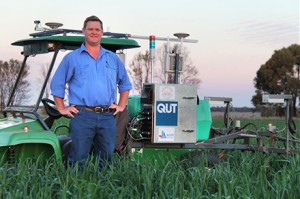 AS Andrew Bate’s farm machinery got bigger and bigger over the past decade, the machines that occupied his thoughts in the tractor cab got smaller and smaller.

As a result, the Queensland farmer, “Bendee”, Emerald, is now talking with some confidence of a future broadacre farming system run by “swarms” of robotic machines, each around the size of a ride-on lawnmower.

He’s confident, because it’s not just Mr Bate that has this vision: it is actively being worked on by world-class teams of scientists in Queensland University of Technology’s Farm Robotics team and at the Australian Centre for Field Robotics.

Mr Bate, whose quest to stay ahead of farming’s cost-price squeeze has made him a lifelong innovator, is an industry partner in a push to realise a concept, the “Swarm Farm”. 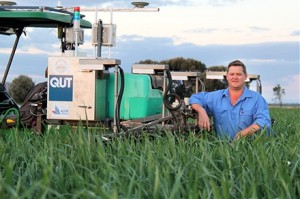 Each SwarmFarm robot machine will be in itself extremely simple, with a minimum of moving parts, but will be capable of carrying a variety of tools.

The hardware will be in many ways secondary to the software.

As Mr Bate puts it, “we already know how to do most of the things we want to do in farming; we’re just working out how to automate it”.

Robotics researchers have long been interested in learning from insect swarms. A bee brain only has about 960,000 neurons (the human brain has around 86 billion), but bee swarms are capable of breeding, defence and the sophisticated work of building and maintaining a hive.

Translated to robotics, this calls up a vision of many simple machines that are collectively capable of highly sophisticated tasks, performed with great efficiency.

In an about-face on current machinery trends, they are small and simple, and probably slow.

Small means little or no soil compaction, so farmers can reclaim their paddocks.

Simple means electric drives, with very few moving parts, and modular components that can be quickly swapped out in the field.

The complexity will be in the machine’s software, or in the swappable ecosystem of tools they are designed to carry.