Role of Potassium in Plants 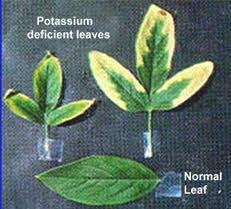 Potassium is a univalent cation with hydrated ionic radius of 0.331 nm and is an essential macroelement in plant nutrition. It is taken up in a large quantity and is highly mobile in plants. Young roots and fleshy fruits are rich in K+. In plant cells, the highest concentration (in the range of 130–150 mM) is in the cytosol, whereas vacuolar K+ concentration ranges from 20–100 mM and reflects the K+ supply (Fernando et al., 1992). Solution-culture studies have demonstrated that plants cannot grow or survive without K+ (Mengel, 2007).

Enzymes serve as catalysts for chemical reactions, being utilized, but not consumed in the process (Wyn Jones and Pollard, 1983). They bring together other molecules in such a way that the chemical reaction can take place. Potassium activates at least 60 different enzymes involved in plant growth. Potassium is electrostatically bound at the enzyme surface and thus changes the conformation of the enzyme molecule exposing the appropriate active sites for reaction.

An ample supply of K+ is essential to efficient operation of these systems (Anonymous, 1998; Taiz and Zeiger, 2010). Protein synthesis is inhibited if plants are deficient in K+. Precursors of protein synthesis as amino acids, amides and nitrate may be accumulated if K+ supply is inadequate (Helal and Mengel, 1979). The role of K+ in protein synthesis was demonstrated by incorporation of 15N-labeled inorganic nitrogen into the protein fraction and within 5 h 21% more 15N was incorporated in protein in K+-sufficient compared to K+-deficient tobacco plants (Koch and Mengel, 1974). Potassium also promotes the uptake of amino acids and is vital for protein synthesis (Leigh andWyn Jones, 1986).

Transcription and translation, the steps in protein synthesis,would be impossiblewithout adequate K+ supply to crop plants (Anonymous, 1998). Its involvement in binding of tRNA to ribosomes for protein synthesis has been discussed by a number of researchers. Nonetheless, it is not clear which particular enzyme of translation or ribosomal site is activated by K+ (Mengel, 2007). In photosynthesis, NADPH plays a major role; biosynthesis of this co-enzyme is triggered by K+ (Pfl¨uger and Mengel, 1972). Hawker et al. (1974) suggested that starch synthase is the enzyme involved in starch synthesis and K+ is vital for activation of this enzyme. Thus, with inadequate K+, the level of starch declines while soluble carbohydrates accumulate. In K+-deficient plants, the accumulation of soluble carbohydrates and nitrogen compounds as well as decreased starch concentration presumably are related to the K+ requirement of enzymes such as pyruvate kinase and phosphofructokinase. In the enzyme dialkyl-glycine decarboxylase, K+ is centered in an octahedron with O atoms at the six corners (Fig. 1). These O atoms are provided by three amino acyls, one water molecule and O of hydroxyl groups of serine and aspartate (Miller, 1993).

The electrochemical difference between the cytosol and the outer medium is of decisive importance for ion transport. Due to presence of various selective K+ channels (Yamaguchi and Blumwald, 2005), plant-cell membranes are relatively permeable to K+ which is involved in charge balancing in the various processes of the cell. The K+ is imported into the cell as long as the electrochemical potential in the cytosol is lower than in the outer medium. With the import of K+, the electrochemical potential increases and finally attains the equilibrium (Mengel and Kirkby, 1980). The negative charge of cytosol is maintained by the activity of plasmalemma H+ pump permanently releasing H+ ions from the cytosol into the apoplast and thus maintaining the negative membrane potential in the range of 120–200mV. Potassium also plays a major role in the transport of water, nutrients, metabolites and phyto hormones throughout xylem and phloem (Chrispeels et al., 1999). When K+ supply is reduced, translocation processes are depressed.

Potassium neutralizes various organic anions and other compounds within the plant, helps to stabilize pH between 7 and 7.5 optimum for the most enzymatic reactions. Likewise, transport of organic acids through phloem also depends on K+ (Mengel and Kirkby, 1980). Potassium ions are very important for phloem loading and transport, particularly sucrose and glutamine are presumably taken up into the sieve cells at higher apoplastic pH by co-transport. Hence, at insufficient H+ supply K+ can substitute H+ for the transport of important metabolites required for growth and storage. The favorable effect of K+ on the transport of assimilates to growing plant organs has been shown. The concentration of K+ in phloem ranges from 60–100 mM (Mengel, 2007).

Potassium can be transported easily through biological membranes and perform the important osmotic functions. In root cells, K+ decreases the water potential and makes the water uptake possible. Xylem parenchyma cells extrude K+ into xylem vessels where it decreases water potential and attracts the water there which helps to create the root pressure. Potassium may accumulate in vacuoles at high concentration where it not only represents K+ storage but also functions as an indispensible osmoticum. In most cells, the volume of vacuole is relatively large and its turgor is essential for the tissue turgor. The osmotic function is nonspecific as several organic and inorganic osmoticamay regulate it in plants.

Nonetheless,K+ is the predominant osmoticum in this regard which is transported at sufficient rates to the fast-growing tissues (Mengel, 2007) and plays a key role in maintenance of turgor in the guard and motor cells (Moran et al., 1988), and phloem (Smith and Milburn, 1980). Likewise, most plants depend upon K+ to regulate the opening and closing of stomata (Anonymous, 1998).When K+ moves into the guard cells, the cells accumulate water and swell, causing the pores to open and allowing gases to move freely in and out, while in the instance of water deficit, K+ is released from guard cells. The pores close tightly to prevent loss of water and minimize drought stress to the plant.