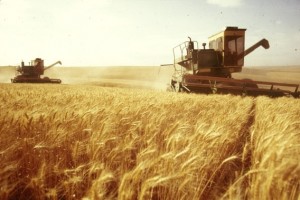 European wheat futures set a new four-month high on Monday before turning lower as reports that an official crop estimate in Argentina may be revised upwards encouraged traders to book some profits.

The European benchmark tracked movements in Chicago futures , which extended a rally to a new high since early June before falling back below the psychological $7 threshold it breached late last week.

“(Russian) flour millers and exporters are actively buying milling wheat,” SovEcon agricultural analysts said in a note. “In this situation many farmers have started to suspend selling wheat in anticipation of higher prices.”

Russia’s export prices for wheat with 11.5 percent protein content rose $10 to $272.5 per tonne on a free-on-board (FOB) basis in deepwater ports last week compared with a week earlier, according to SovEcon. Delivery on a FOB basis requires a seller to deliver goods on board a vessel designated by the buyer.

Holding back from selling wheat, farmers prefer to sell sunflower seeds to get working capital now, SovEcon said, adding to pressure on domestic prices, which fell 350 roubles to 10,175 roubles ($320) per tonne last week.

IKAR saw its price index down 80 roubles to 9,920 roubles. Export prices for sunflower oil rose $10 to $880-890 a tonne on a FOB basis in the Black Sea, SovEcon added, while IKAR quoted the export crude sunoil price also flat at $865 a tonne.

As for sugar, the Krasnodar price index was up 100 roubles to 22,700 roubles per tonne, IKAR said.

Weather has turned for the better, speeding up rain-delayed harvesting, sowing and easing difficulties for exporters, analysts said.

The country’s grain exports may rise during the second half of October from 1.1 million tonnes in the first two weeks of October, according to IKAR. This figure included 880,000 tonnes of wheat and excluded pulses.

Russia is officially expected to export about 20 million tonnes of grains this 2013/14 marketing year, of which 9.1 million tonnes had already been exported between the start of the season on July 1 and the end of September.

Alongside weather factors, Russia’s government started its restocking campaign on the domestic market last week after several delays. During two tenders held on Oct. 15 and 16, it bought 58,050 tonnes of grains, mainly wheat, in Siberia.

The government aims to buy up to 6 million tonnes of grain for the 2013/14 marketing year, of which up to 3 million tonnes are to be bought by the end of December.