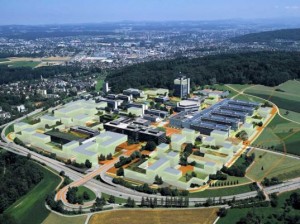 Humans are pretty temperature-sensitive creatures, which means we use a ton of power every year through heating and air-conditioning systems. But imagine if there were a way to save the summer’s hot air and use it to heat buildings throughout the winter. Sounds like science fiction, right? Well one Swiss University has a plan to make that dream a reality with their campus, Science City.

Honggerberg Campus in Switzerland aims to create such a heating and cooling system on its Science City Campus. Every summer, appliances, computer servers, and people themselves give off a lot of heat. In most cases, this heat is pumped out into the environment through fans and cooling devices, essentially wasting a natural power source. Through an innovative plan developed by Gehrard Schmitt, Science City will harness that natural heat, pump it underground, and store it during the summer. Then, when temperatures dip low during the winter months, that warm air will be pushed back up into buildings where it will act as a heating system. The scheme is the first of its kind, and if all goes according to plan, it will allow the university to manage its energy while minimizing carbon emissions.

Two heat storage fields are currently being constructed on the campus. Eventually, the system will be made up of about 800 pipes that stretch 200 meters each. The pipes are to be laid five meters deep in the ground beneath buildings and alongside structures. The system of tubes will act as a heat storage unit, and will be connected to the building’s supply network. Schmitt’s revolutionary heating and cooling system uses low-energy, or “anergy.” Once completed in 2020, Science City will only need to rely on traditional electricity for one-twelfth of its heating and cooling needs. The rest of the energy will be provided through Schmitt’s heat-exchanger system. Now that’s a plan that makes those sweaty, summer months seem a little more bearable.