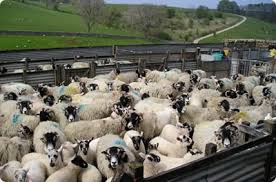 For Ghulam Shahwani Farooq, a small-scale livestock farmer from Mastung in Balochistan, his work is more than a livelihood, it is a legacy. “This herd has been with our family for generations,” said Farooq, speaking about the 300 head of Baloch-breed sheep in his family’s herd. “We Balochis grow up watching our fathers and mothers care for our sheep. In return, we get milk, wool, meat, and a lot of warmth from our herds.” Farooq wants to pass this family tradition on to his children, which is why he traveled to Australia in January for a three-week study tour sponsored by the U.S. Agency for International Development (USAID) to learn modern farming practices, increase his income, and ensure that he can pass the family livestock business on to the next generation.

More than 40% of Balochistan’s economy relies on sheep and wool. But despite its vast importance to the province’s economy, the sheep-growing sector is still mainly using traditional, centuries’ old techniques. There is significant demand in other provinces of Pakistan for the wool from Balochistan to use in carpets and blankets, and Baloch farmers are eager to tap into that huge market. The USAID-funded Balochistan Agriculture Project helps these farmers along the border with Afghanistan to increase their incomes by modernizing their farming activities. Farooq’s study tour was part of that project. During their visit, Farooq and other Baloch sheep farmers were introduced to Australian sheep farmers, who are leaders in the global sheep and wool marketplace. They had opportunities to learn about international industry best practices and experiment with modern equipment.

Farooq was most fascinated by the activities that add value, which Australians apply to the wool after the sheep are sheared, such as washing, sorting, and bailing. Currently in Balochistan this value-adding work is done in other provinces, but Farooq thinks that by undertaking these simple processes in their homes instead of having them done elsewhere, the families of Bloch shepherds can increase their household incomes. “We have to adopt this system in Balochistan,” Farooq declared. Farooq also plans to implement this and other lessons – such as battery-operated shearing, baling, and primary grading based on color – at his farm. The USAID-funded Balochistan Agriculture Project has already helped introduce all of these innovations to several other farms. Once these advances are combined with direct marketing training, these improvements have resulted in approximately an 80% increase in income for the farmers adopting these advanced business practices.

The U.S. is committed to working with Pakistan toward a brighter economic future. More jobs and higher incomes, particularly among the 45% of the population employed in agriculture, are essential for prosperity to reach all Pakistanis. This initiative is just one part of a comprehensive U.S. economic growth assistance program for Pakistan which includes expanding irrigation by more than 200,000 acres near the Gomal Zam and Satpara dams; constructing more than 1,000 km of roads to connect communities and facilitate trade; modernizing dairy farms in Punjab; and launching private equity investment funds to help small and medium businesses grow.