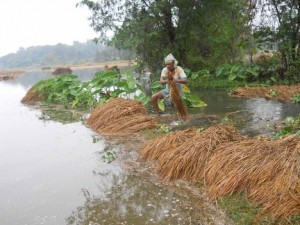 Standing paddy crop spreading over 6,496 acres of land has been badly damaged due to heavy rains and flood in Sialkot district.

According to a rough estimate, the paddy crop amounting to Rs 45 to 50 crores has been damaged in Sialkot, Daska, Pasrur and Sambrial tehsils of Sialkot district.
Sources in Agriculture department told Business Recorder here on Friday that the paddy growers of four tehsils of the district are confronting with serious constrains due to the damage of their paddy crop.
Sources further revealed that under the directive of Punjab Chief Minister, a detailed survey is jointly conducted by revenue, local government and agriculture department to ascertain the damages caused by the heavy rains and flood in four tehsils of Sialkot District.
According to the survey report, as many as 449 villages out of total 1,442 villages are adversely affected due to the heavy rains and flood, sources disclosed.
Tehsil-wise affected area in Sambrial is 2,700 acres, in Pasrur is 2,600 acres, in Daska is 945 acres and in Sialkot tehsil is 251 acres.
Sambrial and Pasrur tehsils of the district are the most affected areas. Sources said that paddy crop cultivated in low-lying areas is affected adversely due to heavy rains and flood in Sialkot District.
News Source
Courtesy Business Recorder
Tweet