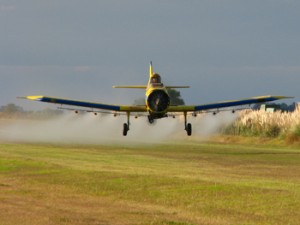 Since the late 1990s, three U.S. universities have been investigating the impact of common chemicals in the environment on brain development. Berkely has focused on an agricultural area in California, while Mount Sinai and Columbia have followed multi-ethnic, low income families in New York City. After nearly two decades of longitudinal studies, all three research programs have reported that organophosphates, a major class of pesticides, cause abnormal brain development in children leading to lower IQs, attention deficit disorders, and developmental lags.

Previously, research on lab animals and studies on farm workers revealed a link between high levels of pesticides and neurodegenerative diseases, like Parkinson’s. Based on this established connection between neurological damage and pesticides, scientists began to question if early exposure to pesticides has a hand in the increase in diagnoses of ADHD and learning disabilities in children.

All three studies recruited hundreds of pregnant women and measured the amount of pesticides to which their unborn children were exposed. From infancy the children were tested at regular intervals for mental deficits, behavioral defects, and developmental delays with respect to confounding variables, e.g. other toxic exposures, race, sex and family income. Children in the group with the highest level of pesticide exposure in the womb showed abnormal reflexes as infants, slowed mental development at age 2, ADHD-like behaviors by age 5 and significantly lower IQ scores by age 7.

Researchers at Columbia also performed an MRI study which revealed that the children with high prenatal pesticide exposure had altered brain regions corresponding to emotion, social cognition, and inhibition. Additionally, some normal sex-specific differences in the brain were absent, suggesting that pesticides also interfere with normal sex differentiation.

Pesticides containing organophosphates are used to combat insects that destroy crops and have widely been regarded as a major factor in the increase of agricultural productivity in the last century. They work by inactivating the enzyme cholinesterase in an insect. This inactivation leads to the inability of the insect to breakdown the most common neurotransmitter, acetylcholine. Under normal conditions, acetylcholine fine-tunes the activity of all neurons. The problem is cholinesterase and acetylcholine are not specific to insects, and are actually equally important in humans. It’s not difficult to see that off-target effects are a problem.

As pediatric epidemiologist, Dr. Bruce Lanphear, simply puts it, “Pesticides were designed to be neurotoxic. Why should we be surprised if they cause neurotoxicity?”