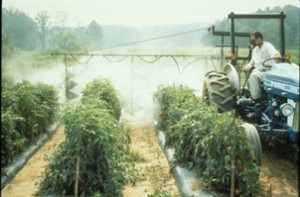 Knowing that herbicides are poisoning ecosystems and degrading human health is enough to get you down. Hold on, though. Recent research has found a significant link between herbicide exposure and depression. Findings were reported in the American Journal of Epidemiology.

A study of more than 700 French farmers found that those who used herbicides were 2.5 times more likely to develop depression than those who did not. Further, the higher the exposure to herbicides, the greater the chance of being treated for depression.

The authors go on to say: “If true, our findings have important public health implications for agricultural workers given the tremendous public health burden of depression and the fact that herbicides are widely used in agriculture and landscape management.”

As REALfarmacy reported previously, the EPA has raised the allowable level of glyphosate in our food. This comes on the heels of a tremendous rise in the use of glyphosate after Monsanto unleashed its RoundUp Ready crops that are engineered to be drenched in the herbicide. The hbiotech industry is working on new GMO crops that can withstand other, more toxic herbicides like 2,4-D and dicamba.

Although the mechanism behind this disturbing relationship of herbicide use and depression is not yet known, it adds to the growing scientific evidence that herbicide exposure is a health hazard. Studies are finding possible links between Parkinson’s disease, infertility, cancer, and birth defects. Now we find out that herbicides can have psychological effects too.

Herbicide use by homeowners is certainly common. And it’s no wonder, as a visit to the big box home improvement stores inundates a person with ads for manufactured poisons. The biggest herbicide use, however, exists in the agricultural sector. According to EPA reports from 2007, 80% of pesticide use (including herbicides) was in agriculture.

Herbicide use is bound to continue rising as long as industrial agriculture and GMO companies control the food system. In fact, this is a market strategy considering that herbicide-resistant crops are central to their plans for the future. Can we expect a concomitant rise in cases of depression?