Home / Agri Punjab / The Role of Agribusiness Firms in Agricultural Research: The Case of China

The Role of Agribusiness Firms in Agricultural Research: The Case of China 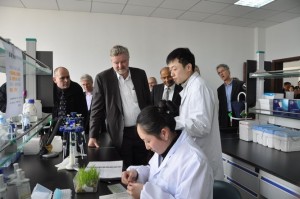 Despite the efforts of various economists and agricultural scientists in calling for more investments, funding for agricultural R&D has been stagnated for the last two decades in China. This will pose a great challenge for the China’s agricultural sector. Productivity has leveled off, and farmers’ income has been flat. As a result, poverty reduction in recent years has also not shown any significant progress. On the other hand, agribusiness firms have emerged rapidly since the rural reforms initiated in 1978.

The data used for the proposed study will be based on a survey conducted by the Ministry of Science and Technology in 2003. The authors provided substantial inputs in the design of questionnaire. More than 500 leading firms (based on their sales) were surveyed. They are located in different parts of China: coastal, central and western. They also represent different sectors, for example, crop production, livestock, feed processing and supply, vegetables/fruits/tree, tea, fishery, seed development/sales and biotechnology/medicine. There firms also vary by their ownership, for example state-, private-, and collective-owned, shareholding, and multinational companies.

The proposed study will develop a conceptual framework and to empirically analyze how different factors have affected the performance of these firms. The performance indicators may include profitability, productivity, and more importantly their behavior in investing agricultural R&D. The factors may include their size, ownership (state, private, shareholding, or foreign), location (coastal, central or western), different types of businesses (crop production, livestock, fishery, processing, feed supply, seed breeding and supply, or biotechnology), credit/capital constraint, intellectual property rights regime, tax concession policy, and public investment in agricultural R&D.

Many variables are province-specific as many government policies such as those on credit/capital, tax are made at this level of government. These variables will have to be treated carefully as they are potentially endogenous by themselves. Special econometric techniques will be used to minimize the potential bias. In addition, some firm-specific variables such as sectors they involve, ownership, and even locations are self-selected. Again, certain econometric techniques have to be used to test and to minimize the potential selection bias.