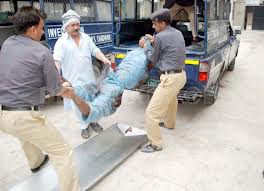 LAHORE: Three robbers were killed by the police in an alleged encounter within the jurisdiction of South Cantt police limits on Sunday.

The deceased are yet to be identified. Police said one Faizul Hassan along with his wife was passing through Airport Road when four robbers riding on two bikes intercepted them and deprived them of cash and two cell phones. Meanwhile, the South Cantt police officials spotted the robbers near Ring Road who opened firing at them.

The policemen also retaliated and as a result of which three robbers died on the spot while the fourth one escaped from the scene. Police recovered Rs 29,000, two cell phones and three pistols from their possession. Sources said all the three persons involved in various cases of heinous nature had already been in police custody. Police registered a case and shifted bodies to mortuary.

The deceased was identified as, Adeel Nisar, of Bagrian village. Adeel died after a stunt he was performing on his motorbike along with his friends in Green Town area. Police said a group of youngsters were performing stunts on their motorcycles when Nisar collided with another motorcycle as a result he received severe head injury. He was rushed to a local hospital where he was pronounced dead.

Cause of fire was said to be a short circuit. However, goods worth millions of rupees were reduced to ashes when fire erupted in a cardboard factory. Fire fighters rushed to the scene and extinguished fire after hectic efforts. No casualty was reported in the said incident.

Investigation and CIA police rounded up at least 16 proclaimed offenders and fugitives involved in kidnapping for ransom and subversive acts.