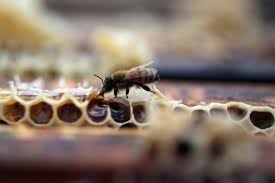 In order to feed a growing global population, agriculture is under pressure to increase its productivity.

The ecosystem service of pollination is necessary for, or can improve, the yield of 39 of the world’s 57 major crops. The proportion of crops requiring pollination continues to increase in global agriculture, yet over the last half century, crops that are dependent on pollination have shown lower increases in yield than non-pollinator crops, and there is much concern over the decrease in pollinating species, such as the honeybee (Apis mellifera).

This study explored how the presence of wild, non-Apis bee species, affects the pollination success of almond orchards in northern California. The presence or absence of wild bees was noted. Orchards are generally configured in rows of trees with one variety in each row to simplify harvesting, but the vrarty of tree alternates between rows, in order to encourage the beneficial pollination between varieties. The movements of honeybees were recorded within rows (of the same variety) as well as between rows (and therefore varieties). The numbers of visits made by honeybees to flowers were monitored, as were the success of flower fertilisation and subsequent fruit growth. In one of the orchards, three large cages were set-up containing two rows of four trees and a variety of bee species, including honeybees and wild bees.

Almond pollination and fruit growth were considerably more successful in orchards where wild bees were also present, as they were in the cage experiment. The presence of wild bees was considered to cause honeybees to cross between rows more often – thus increasing cross-pollination. How the wild bees were causing honeybees to cross rows more often was not known, although possible mechanisms included competition for flowers, and the effect of scent-marks left by wild bees.

The study suggests that maintaining habitat for wild bees in the vicinity of almond orchards is likely to increase yields. A 5% increase in fruit yield was observed in the cage experiment. Extended to orchard-scale, such an increase could result in farmers making $239 (€185) more per acre thanks to increased bee diversity.

The win-win scenario of improving yields whilst benefiting biodiversity is attractive, especially given the need to increase production whilst avoiding the negative historical impacts of agriculture on ecosystems, for instance, those from habitat alterations and agro-chemicals. This study contributes to the evidence base that demonstrates the benefits of combining ecology with agriculture.