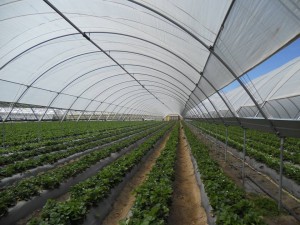 Tunnel farming, which had started gaining some popularity during the last few years, particularly in Punjab, seems not only to have lost its earlier momentum, but is on the decline.

The federal approval for imports of much cheaper Indian vegetables round the year has hurt farmers on this side of the border. Investment in tunnel structures starts fleeing from loss-making ventures.

If farmers are to be believed, the tunnel acreage had touched 55,000 acres during the last few years. Out of them, over 40,000 acres were in Punjab alone. Now, the figure has dropped to 30,000 acres in the last two years. As per farmers claim, out of the total Indian export to Pakistan, around 38 per cent are fresh vegetables.

Officials, however, dispute the 30,000 figure but do concede that the acreage is declining slowly. They also agree that Indian vegetable imports are much cheaper than what they cost to the Pakistani farmers.

Indian export data also substantiates farmers’ claim. The Indians sent vegetables worth Rs39 billion (in Indian rupees) to Pakistan in 2011-12, up from Rs1 billion in 2010-11. The onion export of Rs1 billion was in addition to those Rs39 billion.

These imports from India have started hitting local farmers on three accounts. Firstly, it is the cost of production factor. Secondly, it is the archaic seed industry that hugely adds to the cost of doing vegetables business. Thirdly, it is timing of imports.

Tunnel farming is a capital intensive business that increases the cost of production. It not only includes onetime cost of structure, which is massive by any standards, but farmers also have to maintain temperature and humidity levels in those tunnels with an expensive electricity, when and if available. The cost simply skyrockets if farmer has to maintain both temperature and humidity with his own diesel-driven power generation. Apart from routine care, the farmers sometimes have to apply pesticides and weedicides too. All these factors make the entire process very expensive.

The input costs in Pakistan, as compared to their Indian side, makes local vegetables expensive by almost 100 per cent. In India, all inputs (fertiliser, diesel, electricity etc) are massively subsidised.

In Pakistan, they are taxed, and thus expensive up to 27 per cent. On this count alone, the cost of production differs by almost 70 per cent between both sides of the border.

What makes this cost of production equation further skewed is the state of the seed industry on both sides. The Indians have developed their industry to a level where they produce almost entire range of hybrid seeds for vegetables. In Pakistan, farmers have to import them all – at a mind-boggling cost. For example, cucumber is one such crop that is produced in tunnels.

According to farmers, seed cost of each cucumber ranges between Rs8 to Rs10. One acre of cucumber needs up to Rs125,000 for seed alone. If Pakistan develops indigenous cucumber hybrid seeds, the cost would come down from Rs10 per piece to 50-paisa per cucumber.

Finally, it is the timing of imports that hurts the farmers decisively. Pakistan mainly grows four crops (tomato, cucumber, hot and sweet pepper) and their harvesting and selling time fall in the first quarter of every year. It is during these four months when the farmers expect to retrieve their investment and also make some profit.

Precisely during these months, the Pakistani importers start receiving consignments from across the border and bring the prices much below even the cost of production on this side of the border. All Indian advantages of cheap inputs and hybrid seeds come into play to make local farmers loose heavily.

There is no denying that tunnels increase the produce as well – from 10 to 15 times, But, the farmers first have to invest in tunnel farming and the quantity of produce only matters if farmers get proper returns.

This policy of liberal round-the-year vegetable imports through Wagha border also flies in the face of tunnel-farming promotion policies pursued by the federation and the Punjab during the last many years.

Punjab had recently concluded a three-year project where it distributed some 4,500 tunnel structures at the 50 per cent to promote this kind of farming. After that, it has been designing a host of projects (like the kitchen gardening) to increase production of vegetable, and bring their prices down. How this new situation fits in that policy framework, Punjab needs to ponder and re-adjust.

The federation, on its part, should thoroughly weigh the cost of each policy before initiating it. One way of doing it is to get all stakeholders on board at the policy formation stage and then debate the results in public.