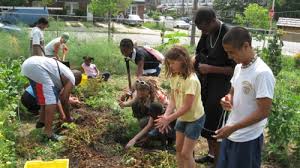 Around 50 of London’s community food-growing gardens will be throwing open their gates to the public in September, resulting in the largest opening of food growing spaces on a single day for any one city in the UK.

On Saturday, 3 September 2011, the gardens are inviting Londoners to explore their neighbourhood growing spaces. The spaces are all members of the Capital Growth campaign to support 2012 community food-growing spaces by the end of 2012. Many are putting on activities such as garden tours, talks, and games, as well as selling garden produce, homemade food and barbeques.

A number of East End housing estates with vibrant food-growing spaces will also be part of a guided walking tour on the day, plus there are details of cycle routes available so people can hop on a bike to experience the incredible variety of spaces on show across the city.

Capital Growth was launched in 2008 by the Mayor of London and Rosie Boycott, the chair of London Food, to offer practical and some financial support to boost ‘grow your own ‘in the capital. The Mayor announced recently that there are more than 1050 spaces up and running involving 35,000 green fingered volunteers.

Rosie Boycott, chair of London Food, said: “It’s fantastic that so many Capital Growth spaces will be opened up to inspire others and encourage more people to try their hand at growing their own food.   There is now a huge variety of plots across the capital being cultivated by London’s urban farmers, proving what communities can achieve when they come together to transform unused or derelict green spaces.   Edible Open Gardens is a great way of showing people that if you want to grow your own, there are alternatives to joining huge waiting lists for sought after allotments.”

Ida Fabrizio from Capital Growth explained: “There is an incredible range of projects in our network and this day gives people a chance to sample a great selection, including an edible roof garden on top of a Budgens supermarket in Crouch End, and a floating garden on a barge in Islington. These show how unused spaces across the Capital have been transformed by community groups. “

Other sites that will be open include Cultivate London who transformed areas of derelict land into productive spaces, generating both training opportunities and jobs for unemployed young people. Mind in Haringey will also be open to showcase how they have changed an overgrown strip of land into a thriving community allotment, supporting their members as part of their recovering from mental health problems.

This year has also seen the launch of a bee campaign, which promotes urban beekeeping across London, as part of Capital Growth. Many sites, such as the Secret Orchard in Lewisham and North Brick Lane Gardeners in Tower Hamlets, now have bee hives and will be selling their excellent urban honey at their open days.

Dreams of Eden, a community food-growing space set up in a disused back garden, took part in last year’s Edible Gardens Open Day. They commented:  “The open day was a great success and generated so  much interest – we had over 70 people stretch our little garden to bursting point! Games and music meant there was never a dull moment and the space itself seemed to capture peoples’ imaginations. We gained more volunteers and contacts than we could have hoped for, while others were inspired to strike out and set up their own projects.”