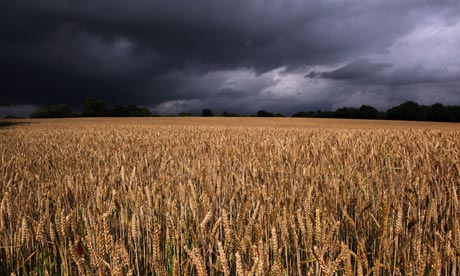 It is a mystery that could cost the American farmer billions:

The scientist who first discovered the renegade grain – by dipping a plastic strip into a tube of pulped plant, in order to check its genetics – believes the GM wheat could have entered America’s food supply undetected years ago, and could still be in circulation.

The Department of Agriculture, which is conducting a secretive investigation into the renegade GM wheat outbreak, maintains the GM wheat remained confined to a single 125-acre field on a single farm in eastern Oregon. Officials said there was no evidence the contaminated wheat was in the marketplace.

Monsanto, which manufactured the altered gene and conducted field trials of the GM wheat several years ago, strongly suggested in a conference call with reporters on Friday that the company was the victim of sabotage of anti-GM campaigners. Robb Fraley, Monsanto’s chief technology officer, said:

It’s fair to say there are folks who don’t like biotechnology and who would use this as an opportunity to make problems.

The real story is unlikely to emerge – if at all – until the publication of the final report by 18 Department of Agriculture investigators who are now scouring grain elevators, farmers’ fields and university research stations in eastern Oregon, hunting for a few grains of suspicious wheat.

The stakes are high for America’s wheat exports, with Japan and South Korea cancelling shipments; for Monsanto, which faces lawsuits from farmers for falling wheat prices and a consumer backlash against GM products; and for the US government, which must shore up confidence in the safety and integrity of the food supply.

The crisis for wheat farmers began in late April, with a phone call from a crop consultant seeking the advice of researchers at Oregon State University in Corvallis. The consultant had sprayed Roundup, a weed killer also manufactured by Monsanto, on some fallow land. Ordinarily, glyphosate, the active ingredient in Roundup, would be expected to clean out the entire 125-acre field. This time, however, some plants survived.

The consultant, fearing he had come across a “superweed”, got in touch with the university and sent some plants in for testing. A clump of plants, carefully wrapped in plastic to keep them green, arrived by Fed-Ex on 30 April. Scientists separated 24 samples and tested them for the presence of Monsanto’s Roundup Ready gene, CP4, which was developed to be resistant to glyphosate, the active ingredient in Roundup weed killer.

“They all came up positive,” she said. So did a second battery of tests by another lab at the university and independent testing on a different set of wheat plants collected by researchers from the Department of Agriculture. The scientists were still slightly disbelieving, however. The only chance for contamination by the GM wheat, it was thought, was from field trials Monsanto conducted in the late 1990s until 2005.

The wheat was grown in more than 100 test plots in 16 states over several years, but the company wound down the last of the trials in 2005, because it saw little market potential. Unlike the other big crops – corn, soybeans, cotton and canola – American farmers have never raised GM wheat on a commercial basis. The US exports much of its wheat to Asia and Europe, who do not want GM products. The Oregon field trials stopped in 2001.

Monsanto is currently testing a next generation of GM wheat in North Dakota and Hawaii. The company insists the seeds from those earlier trials were shipped backed to its labs in Missouri or destroyed in the field and driven deep into the earth with a backhoe.

“Most of the seed was destroyed in the field,” said Jeff Koscelny, who heads Monsanto’s wheat sales team. “It never left the site, and it was buried. To us, it’s not logical there were any seeds out there.”

The sabotage conspiracy theory is even harder for me to explain or think as logical because it would mean that someone had that seed and was holding that seed for 10 or 12 years and happened to put it on the right field to have it found, and identified. I don’t think that makes a lot of sense.

She was also sceptical of Monsanto’s claims to have gathered up or destroyed every last seed from its earlier GM wheat trials. In recent years, as American farmers rely increasingly on GM crops, there have been a spate of such escapes, including rice, corn, soybean, and tomato. Oregon is still trying to contain a 2006 escape of GM bentgrass, used on golf courses, which has migrated 13 miles from where it was originally planted.

“Once we put a trait or a gene into the environment we can not expect that we are going to be able to retract or bring back that gene and find every last gene that we put out there,” said Mallory-Smith. Tracing the course of an escape so long after Monsanto’s field trials will be even more difficult, she said. “It’s like finding a needle in a hay stack,” she said.

One morning in late June, farmers from wheat-growing areas in Oregon, Idaho and Washington state drove their pick-up trucks to the station, to learn about the latest advances in farm technology – including toy-sized drones – and to catch up on the latest on the GM wheat escape. Some of the farmers were relatively relaxed – those whose land sits relatively high up and don’t expect to harvest their crop until August.

Wheat prices reached historic highs before the GM discovery. If there is no further evidence of contamination, they figure they can ride out the crisis, store their wheat, and wait until Japan and South Korea place orders again. But there is also an undercurrent of suspicion and anger at the unidentified farmer who reported finding GM wheat on his land – consequently putting all of their crops in jeopardy.

“It’s a mystery to me how they even found that GM wheat,” said Herb Marsh, 80, who has been farming in eastern Oregon his entire life. “It’s hard for me to swallow that he would go, and actually get it tested.