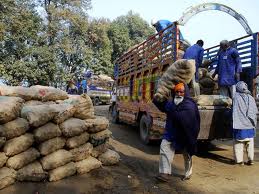 LAHORE – The vegetable growers are losing against Indians at the home turf after opening of trade across Wahga border, mainly because their rivals are growing vegetables at much lower cost as they avail subsidies from their government.

There are fears that the vegetable sector of Pakistan may further loose and ultimately reach to an unrecoverable stage if not properly taken care of and provided with subsidies, incentives.

Ibrahim Mughal of Agri Forum Pakistan while talking to APP here Tuesday said, “Being agriculture country Pakistan cannot afford to face a situation where it has to completely rely on imported vegetables, from not a very friendly neighbour”.

“Indian government’s patronage has economically strengthened their growers and enabled them to move to hybrid seeds and adopt tunnel farming and other latest techniques to minimize costs”, he said.”As a result, despite transportation charges and other overhead costs they have out-rightly beaten Pakistanis”, he said. He expressed his apprehension that whenever Indians would achieve monopoly in this sector they would charge the rates of “their choice” and the consumers will be the ultimate sufferers.

Even the investment in tunnel farming which started gaining momentum in Pakistan few years back is now facing a stand still because of fears of losses in the venture.

“After very hard work we were unable to meet growing expenditures after arrival of Indian vegetables”, he said.

Vegetable sector is much more labour intensive, from the stage of sowing to plucking, washing, packing and transporting the vegetables as paid labour is required at every stage, he said.

“I continued the activity despite of losses with the hope of earning well and with the mind-set that if I stopped this work the labourers attached with this work will become jobless”, he added. However, he regretted that he gave up owing to his weakening financial position. About tunnel farming, he said that a huge investment is required for installation of tunnels and it would not be wise in the present circumstances to make such a big investment without having bright prospects.

Quoting figures compiled by farmers organizations of Pakistan, he said that out of the total Indian exports to Pakistan, around 38 percent are fresh vegetables. He said that tunnel acreage had touched 55,000 acres during the last few years. Out of them, over 40,000 acres are in Punjab. Now, the figure has dropped to 30,000 acres in the last two years.

An official of Punjab Agriculture department conceded that the acreage of tunnel farming is on the decline. He also admitted that Indian vegetable imports are much cheaper than what they cost to the Pakistani farmers.