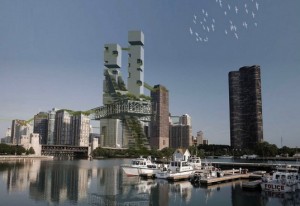 This towering eco high-rise offers a green gateway to the city of Chicago that includes a large vertical farm, mixed-use towers, and a residential tower all tied together by a series of sky bridges. Envisioned by a student at the Illinois Institute of Technology, the project is located over Lake Shore Drive and was designed specifically for the location of the dormant Chicago Spire site, otherwise known as the “Giant Hole in the Ground”.

The Chicago Gateway is composed of two vertical mixed-use towers supported by a leaning tower covered in a green roof. Offices and commercial space would reside in the vertical towers and residences in the leaning tower, which bridges over Lake Shore Drive. All of the structures are connected together via a vertical farm podium, and a network of sky bridges connects the towers and provides access to other nearby buildings. 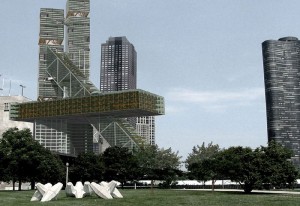 Urban farming via hydroponics would take place inside the green podium, and a green roof would grow additional produce. Vegetables and herbs would be grown in mechanized hanging baskets in the hydroponic farm. Produce from the farm could be delivered via they sky bridges, and the public can access the building and use the elevated routes to travel around the city.