In the pre-independence India, the Punjab province served as the food basket for the country. The Punjab province of each country still performs the same function but Pakistan’s province is doing it inefficiently in comparison with the other side.

What ails the agriculture productivity of Pakistan’s Punjab?

At the government level, the output of the two sides is never compared although it is an ideal case for undertaking a study because soil and weather conditions and the mettle of the farmers are essentially the same quality and calibre. The issue merit’s the government’s urgent attention because therein seems to lie the ingredients for improving crop productivity in Pakistan.

Statistics present a sorrowful picture of comparison. While figures officially quoted in Pakistan are usually not considered reliable by all quarters, there seems no reason to distrust them in this case because productivity could hardly be more dismal than its documented record in Pakistan.

Statistics from India have never been questioned or regarded as tampered by any segment and the country, a genuine democracy, can hardly hope to gain any advantage by cooked up frames of progress; instead of offering a government a political edge, fudged figures could create a mess.

Statistics from official documents of Pakistan have often viewed as motivated by a desire to present a picture rosier than the ugly and frightening ground reality and hence often viewed as inaccurate and on the higher side in case of productivity and lower when it comes to poverty and population growth. 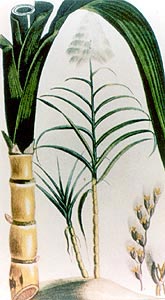 Two of the main cash crops of the two provinces are rice and wheat. Pakistan’s yields in both crops are far behind the other Punjab. For instance, Indian Punjab has shown an annual production growth rate of 11.03 per cent for rice while it has been a mere 3.08 per cent for Punjab in Pakistan.

Indian Punjab produced 14.36 million tons of wheat in 1996- 98 from 3.3 million hectares while the output in Pakistan’s Punjab was 13.13 million tons from 5.9 million ha. Even in other periods, productivity on the other side of Wahga has been consistently higher.

As a result, the Indian state is following a policy of trying to produce more from less land while in Pakistan, more land is brought under cultivation every year to enhance the total yield and meet domestic consumption needs. At the same time, it is well known that Pakistan can ill afford to increase area of cultivated land because of scarcity as also deteriorating quality of water.

The difference between the productivity of the two sides reflects sadly on the state of affairs in Pakistan’s Punjab. According to a study by three Pakistani and Indian experts, “if India were to produce the same amount of rice with Pakistan’s productivity level, it would have to devote an additional area of more than one million hectares under rice”.

The picture of wheat is worse. Pakistan would have to bring an area of about ‘four million ha’ to reach Indian Punjab’s produce. The experts ask the question why yields vary so much under fairly similar ‘agro-climatic, socio economic and managerial conditions’?

Their analyses identify some of the factors contributing to this discrepancy in productivity. They cite productivity performance as partly caused by differences in input use and cropping intensity but link it with the use of technology and resource quality too.

Low productivity is not restricted to Punjab; farmers of Sindh are equally afflicted with this problem though all the reasons for low yields in the province do not follow Punjab’s pattern. Extensive irrigation has caused the water table to rise in Sindh from a ‘depth of 20-3 metre to 1-2 metren within the last twenty years’ and that has had a negative impact on productivity. 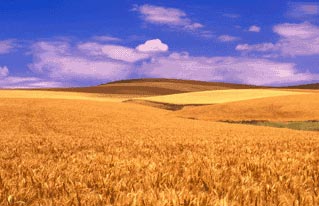 In Pakistan, produce varies from farm to farm, indicating inequity in the availability of resources to farmers. That should read as big landowners usurping the share of small farmers and their resources enabling them to apply the required quantity of inputs to crops. Water efficiency in Pakistan is higher in India.

Land is suffering a process of degradation in Pakistan. India has countered the problem with ‘widespread use of gypsum to combat secondary salinity from tube well irrigation’ by providing gypsum at subsidized rates to states facing salinity. Am organization has been established for this purpose. Pakistan has not undertaken any such measure. The result is rapid degradation of land contributing towards a decline in productivity.

One of the reasons for low produce of rice is Pakistan’s emphasis on low yielding high value Basmati rice while India cultivates early maturing coarse rice. This causes delays in sowing of wheat in areas of rice-wheat regime. Basmati rice is a foreign exchange earning commodity but it has become a case of earning from one source and squandering assets as a consequence.

Basmati rice is harvested late and that automatically delays wheat cultivation in Basmati-rice areas. This is reflected in quantity of wheat yield. Delayed cultivation of wheat means a 1 to 1.5 per cent daily decline in the yield if the crop is sown after the cut-off date for sowing. 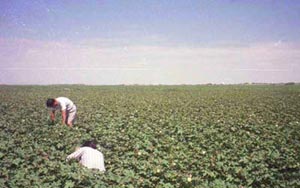 The experts have not taken the impact of sugar-cane on wheat because that too is an important factor in the delay of wheat cultivation. Problems of sugar millers are costing a lot in wheat output. Needless to point out that wheat sowing is completed in time in the Indian Punjab.

It is time the government started seriously investigating and identifying factors causing low productivity of the agriculture sector of Pakistan. The measures announced in the Budget for 2004-05 suggest that the authorities are concerned but they are hardly backed by appropriate policies. High allocations are welcome but the money has to be invested in the right fields, not scattered all over to demonstrate the importance attached to the agriculture sector.