WHAT IS KHARBOOZA? HONEY MELON: HEALTH BENEFITS AND USES OF HONEY MELON 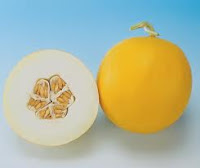 HONEY MELON, KHARBOOZA
It is now the middle of March, and the yellow melons called Kharbooza in Urdu, have arrived from the province of Sindh. These are not the same as honey dew melons although they look a little like them. They have creamy net patterns on their yellow rind and when opened release a fragrant aroma. They are really sweet and taste like honey. All melons and gourds are part of the Cucurbitaceaefamily just as the pumpkin, courgette and ash gourd (petha) do. They have a high water content so do not contain many calories, although they do contain sugars so are not the best fruit for those on a diet.
It is thought that melons (in general) originated in the area that extends from Egypt, to Iran and through to the Indian subcontinent. In Pakistan many varieties of melon are grown, including the cantaloupe and watermelon, and other winter melons (Cucumis melo var. inodorata).

When you buy a melon, don’t throw the seeds away, you can dry them and eat them as snacks as you can pumpkin seeds. They have been eaten in this way for centuries and are very good roasted.
Melons were depicted in Roman frescoes and there is a wall painting in Herculaneum on Sicily which shows a melon split in half. This can still be seen if you visit this ancient site that was, like Pompeii, buried under volcanic lava. Galen used them for medical purposes, and the Romans imported their melons from Armenia. Apicius the Roman chef, wrote about the culinary uses of melons in his cookbook but as his recipe requires honey, the melons he used could not have been the honey melon we have here in Pakistan.

The sweet melons contain vitamin C and K, and B-complex vitamins, as well as being rich in potassium with the minerals calcium, iron, magnesium, manganese phosphorous, selenium, copper zinc also present. They also contain amino acids, including tryptophan and have Omega-3 and -6 fatty acids in them, so they have potent antioxidant properties as well as being very tasty.
In Greek all melons that are not water melons are called peponi which is perhaps an admirable attitude to have as to them it really doesn’t matter what a melon is called, they know what it is by looking at it.

I have never seen these melons in Europe, but that doesn’t mean they don’t travel there now. These Pakistani yellow melons are among the best I’ve tasted and are very sweet and thirst-quenching. The Chinese use them to reduce fevers and to generally cool the body. They are used in this way here in Pakistan too. It’s good that something that tastes so good has health benefits too.
Tweet