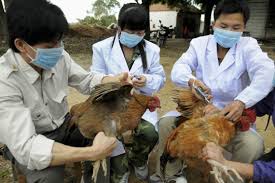 What the Chinese experience of bird flu can teach us

My wife Carmen returned last Monday from a fortnight of touring China with two friends. She brought back several interesting cuttings from Chinese newspapers printed in English for tourists such as herself.
They mostly concerned the outbreak of bird flu, caused by the new H7N9 virus strain, that has infected 130 people since emerging in March and resulted in 36 deaths. Although it appears to be under control it has cost the Chinese economy something approaching £6 billion.
Bird flu, or Avian Influenza to give it its proper name, is caused by many different strains of the virus. One, H5N1, has been spreading throughout Asia for more than 10 years. It reached the Netherlands in 2003 with an outbreak that led to 1255 Dutch poultry flocks being culled and caused the death of a vet.
Although the new mutation of the virus being experienced in China, H7N9, is highly pathogenic in humans and causes severe respiratory disease, it is not virulent among birds, making it nearly impossible for farmers to detect, unlike the H1N1 strain which kills off flocks.
Bird flu can be spread by wild birds, but is more commonly spread by domestic fowl to each other. Humans contract the infection as a result of close contact with poultry, something common in rural China where millions of people run them free-range.
Chinese authorities have shut down live poultry markets temporarily or permanently, as needed, to control the source of outbreaks in 10 provinces, as well as placing tight controls on the transportation of birds.
Their efforts to stamp out the disease were assisted by rising seasonal temperatures at this time of year, because the bird-flu virus prefers cold weather.
While it is obvious such an outbreak would distort prices for poultry meat and eggs, there have been other effects I had never considered.
Down production has declined sharply in China and the cost of down products is likely to soar this winter.
In Jiangsu and Zhejiang provinces, where most Chinese down products are made, about two-thirds of the businesses that work with that raw material have stopped using it. The culling of poultry and closure of poultry markets to halt the spread of the virus have made down hard to come by.
According to experts, even if the outbreak is now under control, it is certain the output of down will drop by at least one-third this year and businesses face the added problem of soaring prices. From April 15 to May 5, down prices rose by more than 50% and in some cases have nearly doubled.
According to the China Feather and Down Industrial Association, 90% white duck down, which sold for about 350,000 yuan (£38,000) per metric tonne in March, cost 550,000 yuan/t by the end of April.
White goose down, according to the China National Garment Association, now costs 820,000 yuan/t, and it’s also in short supply even if the manufacturers are willing to pay cash for it. About 50% of the down used in China is imported, and the association said its cost has also gone up.
Ying Xiaoyue, the manager of the publicity department of Bosideng International Holdings, a leading down coat manufacturer, said the company in Jiangsu needed 300 tonnes of down to make 3.7 million coats for orders from overseas markets. “Though we’ve managed to buy enough down for now, in April we could only purchase 140 tonnes,” Mr Ying said. Many Chinese businesses now have no choice but to cancel or turn down orders because they have n material to work with. Some businesses may not now be able to fulfil orders made before the price rises and will face compensation claims.
A number of foreign retailers are requiring safety certificates with some exported down and feather products, such as quilts and shuttlecocks.
According to the China National Garment Association, down is washed and steamed at 120ºC for 30 minutes before it is used, and the bird-flu virus dies within two minutes when exposed at 70ºC. It stressed that the safety of down garments and products made by regular manufacturers was guaranteed.
I suppose the Chinese experience should be seen as a wake-up call for the rest of the world. Every country should be asking: “Are we prepared for the next epidemic?” In this age of globalisation we must all expect the unexpected.
Tweet