What’s wrong with a factory farm? I love a good steak. 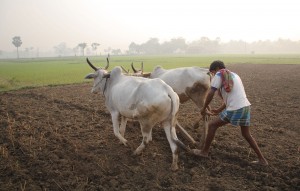 What’s wrong with a factory farm? I love a good steak.

Most of us love a good steak. In fact, we love meat so much that consumption of beef, pork, chicken, veal and other animal protein is increasing at breakneck speeds all over the world. As developing nations like China and Brazil grow, their appetite for meat also grows. By some estimates, meat production has tripled in the last 30 years.

So there are more cows and chickens in China — so what?

The days of the quaint family farm raising a few head of cattle, with Grandma scattering corn meal in the backyard for the chicks, are long gone. Agribusiness is big business: Grazing occupies about 25 percent of the Earth’s land, while feed crops take up about a third of all arable land, by some estimates. And about 80 percent of growth in livestock production is from factory farming, which employs relatively few people compared to more sustainable farming practices.

The factory farm sounds efficient, and I want my chicken to stay inexpensive.

That’s one of the benefits of factory farming; it’s efficient in the short term, creating lots of meat quickly and cheaply — but the long-term costs of agribusiness are staggering. Concentrated animal feeding operations, or CAFOs, and other factory farms have been called “a frontal assault on the environment, with massive groundwater and air pollution problems” by Dr. Peter Cheeke, professor emeritus of animal sciences at Oregon State University.

Air pollution? Sure, manure stinks, but that’s no surprise.

You mean cows from a factory farm are causing global warming?

Cows, pigs and other livestock that are often raised in CAFOs are a big part of the climate change problem; estimates vary, but between 18 and 51 percent of greenhouse gases that cause global warming come from livestock production. But as bad as the air pollution is, the effects on water may be even more immediate and troubling.

Factory farming has effects on water? But cows don’t swim.

Not very well, but they do drink — and pollute — a lot of water. All those tons of CAFO manure have to go somewhere, and much of it ends up in waste lagoons, where it eventually trickles into groundwater, streams and rivers. Beyond that, author and vegetarian activist John Robbins reports that it takes around 60 pounds of water to produce one pound of potatoes, and 168 pounds to produce one pound of corn. But one pound of beef today requires a whopping 12,000 pounds of water, when you factor in irrigation of feed crops, watering, transportation, storage and other farm-to-market calculations.

Twelve thousand pounds of water for one pound of beef? That sounds a little high.

It might be — some estimates are lower, like around 6,000 pounds — but there’s no denying the fact that meat production is a terribly inefficient way to put protein on the table. According to Dr. Rosamond Naylor, director of the Program on Food Security and the Environment at Stanford University, two to five times more grain is required to produce the same amount of calories through livestock as through direct grain consumption. In the case of grain-fed beef in the United States, it’s as high as 10 times more.

But agribusiness provides the protein we need to survive.

True, but nobody needs the huge amounts of animal protein that are typical of the American diet. In fact, diseases like cancer, diabetes, heart disease, high cholesterol, obesity, stroke and other conditions have been directly linked to our over-consumption of animal protein, especially red meat. This doesn’t even begin to take into account the dangers of antibiotics and other drugs in our food supply.

You mean there are antibiotics in my hamburger?

Yes, and in most other factory-farmed meats like chicken, pork and farm-raised fish. Some experts have estimated that up to 50 percent of antibiotics used in the world today go to livestock. The CDC reports that the use of antimicrobial drugs to help livestock grow faster has jumped 50 percent since 1985, and in June of 2010, the FDA called on Congress to impose limits on the reckless use of livestock antibiotics to prevent the spread of “superbugs” that have antibiotic resistance. And when you add in the other synthetic compounds used, like petroleum-based pesticides and fertilizers for growing feed crops, and you have a deadly chemical stew that’s spreading worldwide.

Not at all — agribusiness is a global industry, which accounts for much of its enormous carbon footprint. Livestock raised in South America — where vast rainforests are being wiped out to create more grazing land — are often processed in Europe, then shipped back across the Atlantic before landing in your local grocery store. All that shipping requires immense amounts of fossil fuels and creates tons of pollutants.

You can have my burger when you pry it from my cold, dead fingers.

Most experts don’t insist that everyone go vegetarian, but there are a lot of good reasons to eat less meat. Aside from the immediate health benefits, it’s also less expensive to have an occasional vegetarian meal. Dr. Jean Mayer, nutritionist and former president of Tufts University, estimated that reducing meat production by just 10 percent in the U.S. would leave us with enough grain to feed some 60 million peo