Home / agribusiness / Why Emu farming in Bihar is a very good idea!

Why Emu farming in Bihar is a very good idea! 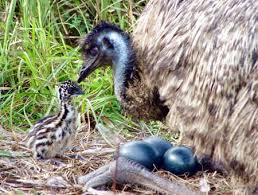 Ranchi-based veterinarian Neeraj Kumar Verma is currently writing a book to guide farmers interested in raising Emus on their farms. Emu, a flightless bird of Australian origin has found home at many sites in the country, including Karnataka and Maharshtra.

Verma is in the process of writing a book that explores the possibility of breeding the birds commercially in Jharkhand. The veterinarian’s work in Hindi is expected to be ready in the next couple of months and would serve as a guide for farmers interested in a new venture.

“The book would be a practical guide for individuals interested in emu farming,” Verma, who is posted with the state animal husbandry department, said.
husbandry department to work out a plan to encourage emu farming in Jharkhand. A.G. Bandopadhyay, the director of the department, then advised Verma to write the book for distribution among farmers.
The benefits of emu breeding are many. An adult bird weighs 50 to 60kg and every kilo of its meat is worth Rs 600 to Rs 800. Every year, a female emu lays 10 to 15 eggs, which sell for Rs 1,000 each. Meat apart, emu oil, feather and skin are useful too. While the oil is used for treatment of arthritis, burns, hair loss and skin ailments, its skin is used in producing apparels. The feathers are used in preparing brushes used for cleaning electronic goods.
Presently, Emu Framing is spread all over the world with significant population in U.S.A, China, Australia including Asian countries. Emu is becoming popular for having 98% fat free red meat and other utilities obtained by products namely; Emu oil, skin, feathers and ornamental eggs and toes.
Emu farming in India is in developing stage. An NRI of West Godavari district in Andhra Pradesh started Emu farming for the first time during 1998. Later breeding flocks spread over entire country for commercial purpose . Presently, emu farming is being carried out in large scale in States of Andhra Pradesh, Tamil Nadu, Maharashtra, Karnataka and parts of Kerala.
Since 2000, Department of Poultry Science, Veterinary College, Venkateshwara University, Andhra Pradesh is doing pioneer work in the areas of research on Emu. Central Poultry Development organization & Training Institute, Govt. of India, established an organized Emu unit during 2007, with a foundation stock of 30 pair breeding stock for expansion and to act as National Centre for Emu. (Presently about 12 months of age). 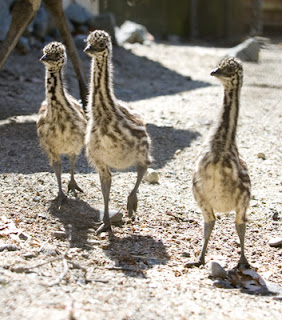 Emus attain sexual maturity by 18 to 24 months. Breeding occurs during winter season of the geographical areas (October to February in India). They are monogamous indicating one male for one female. In nature, the female mates with the male during breeding season and gives a clutch of eggs. Later, male sits for brooding on these eggs for a period of 52 days without food and water. However, the female continues to breed with new partners during the whole breeding season. The chicks hatched out follow the male emu rather than the female.
In commercial farming emus are paired in separate enclosures after maturity depending on the compatibility of the pair. Emu generally gives eggs during evening between 5.30 to 7.00 p.m. Each adult emu after three years can give an average egg production of 30 eggs during breeding season between October to February.

1. Emu meat :
It is 98% fat free red meat, which is similar in look to other red meats Viz., beef, mutton, deer meat etc., Emu meat is rich in iron, Vit C. The tenderness and texture of Emu meat enables to be fit for preparations which are lightly grilled and pan fried, since emu meat is low in fat, it looses moisture quickly and is best under moist heat cooking.
2. Emu Oil:
Emu oil is semi solid white mass, which is generally located all along back of bird, but when it is processed and refined it is a clear liquid. Emu oil fatty acid composition is almost similar to human skin, which makes it to have high permeability when applied on to human skin. This character of emu oil is utilized for treatment of various conditions namely arthritis, skin treatment, burn injuries, hair loss etc., This property of high permeability is made use for delivering specific drug molecules for treatment of skin conditions.
3. Emu Skin:
Emu skin is of high quality with usual yield of about 6 to 8 sq.ft. per bird. Which is used in preparation of leather products including apparels. The leg skin is very unique and with scales similar to crocodile skin and is being used in protective things for knives, swords and shoe top etc.
4. Emu feathers:
Emu feathers have double rafts with sub branching , the down feathers are soft and are being used in preparation of brushes specifically used in cleaning hard ware and circuits of electronic goods including computers.
5. Emu egg and toe nail:
The unfertilized eggs which are emerald green are cleaned and used in crafting antique mementos for sale with different carving on the shell. Emu nails are also been used as key chains, pendants in necklaces. 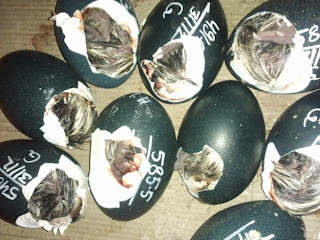 Emu farming in India presently concentrated in Southern States with usual importance given for breeding. Farmer buys 10 to 15 pairs from a big breeder and has an option of becoming a self sustained breeder to produce chicks for sale or an integrated farmer to sell hatching eggs back to the integrator. The products sale in India is yet to take shape due to lack of awareness and non-availability of sufficient emu population. The future of this industry will be diversified into emu farming for fattening and breeding. Emus raised for fattening will be fed with different rations so that they will gain body weight at the earliest and yield all the products suitably. The preferred age for fattening is less than 24 months and ideal is 12 months.
Present estimate of Emu population in India is above two lakhs. The biggest Farm is in Andhra Pradesh with 6000 Emus at one place. Vijayawada,West Godavari, Hyderabad, Chittoor and Nellore, in AP, Coimbatore, Namakkal, Erode and Hosur in TamilNadu, Gokak, in Karnataka, Pune and Nasik in Maharashtra are production belts for Emus.
Tweet