Agribusiness is greener than urban farming 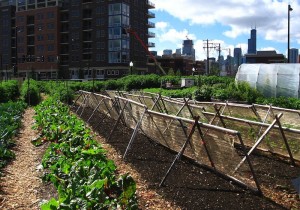 Agribusiness is greener than urban farming

Your upsetting myth debunker for today: Urban farming, the wildly popular green trend that is spreading like weeds in New York City and other metropolises, is an environmental sham.

So says none other than a self-proclaimed environmentalist, who notes that the craze for eating locally grown food emits tons more CO2 (that infamous instigator of climate change) and robs workers of jobs when compared to the honed efficiencies of agribusiness.

Boisvert’s article is not so much an assault on “grow your own” as it is on the inefficiencies of growing and hauling to local markets (although he does slag off “green-urbanist food ideology” in general).

He points out that the freight trains and trucks that haul mountains of agribusiness cabbages and cucumbers and whatnot around the country trounce local vans in “ton-miles per gallon” – the jargon of freight fuel efficiency. A train gets 480-ton miles per gallon; the best case that Boisvert found in New York City’s Union Square Greenmarket got 28 ton-miles.

And another thing: Growers such as New York’s successful Brooklyn Grange farm rely on a lot of “uncompensated” workers to tend the soil and keep yields up, taking jobs away from industrial farmhands, he points out.

And on and on he goes – read the full story at the link above to see more of his arguments. He’s not the only environmentalist who believes that urban farming and so-called “locavorism” (eating locally grown food) is zany. Ecology think tank The Breakthrough Institute republished his article after the Observer ran it.

But other greenies are sure to come with torch and pitchfork in defense of their city cilantro. It seems to me that the truth lies somewhere in the middle. This could become the biggest internecine eco flap since the Skeptical Environmentalist.

Photo of urban farm in Chicago is from Linda via Wikimedia