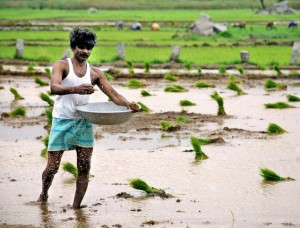 The reduced application of urea for the important food crops could badly hurt the output of these crops that could lead to food security in the country. Due to rising input cost for planting the most important crops from agriculture economy and food security point of view, country’s wheat production in 2013 stood at around 24 million tons, equivalent to the wheat production level of 2009.

According to industry analysts country achieved highest ever record of 25 million tons in year 2011 when cost of important inputs was not beyond farmers’ reach. As against 25 million tons of 2011, country could hardly achieve the target of 23.4 million tons in 2013 indicating a declining trend in the output. This decline in production resulted in import of around one million tons of wheat in 2013 after several years.
Urea usage during Rabi season of this year was just 2.85 million tons, lowest in the last five years except Rabi 2012. Country’s urea off-take during wheat cultivation season in the last five years has seen achieving highest level of 3.25 million tons in 2009-10. The lowest urea off-take during this period has been 2.71 million tons in 2010-11.
Pakistan’s wheat production has seen significant decline in the last two years. Analysts believe that downward trend in wheat production could be partly blamed on less use of urea fertiliser as its shortage and price escalation discouraged its application.
According to stakeholders’ fertiliser usage in the country phenomenally decreased to 5.3 million tons in 2012-13 from 6.5 million tons achieved in 2009, portraying lower off-take due to unavailability and higher urea prices. The main contributing factors in price escalation of urea has been imposition of the general sales tax (GST) and gas infrastructure cess (GIDC) and unprecedented gas curtailment that badly hit several fertiliser plants with an aggregated production capacity of nearly 2.3 million tons. The urea application on soil contributes to around 25 percent in crop yield and if urea application is declining it means we are hurting our output.
Industry sources confirmed that the value of 40kg yield per acre of wheat sown at 23 million acres in Pakistan is equal to Rs 24 billion. Hence, unavailability of urea at proper time for Pakistani farmers could result in at least five to 10 maunds less wheat production per acre.
This has a potential cost to the country from Rs 120 billion to Rs 240 billion that could not only result in increasing food insecurity but also contributing significantly in increasing wheat flour price and its products that is a major portion of daily food of almost 80 percent population of Pakistan.
The resultant squeezing supply of wheat has already started hitting urban population hard, he said. Referring to the cost of production of farmers, he said, the total per acre fertiliser cost in 2008-09 was Rs 4, 450 which increased by 83 percent in 2012-13 to Rs 8, 125 per acre for the average farmer. Hence, sources said, Pakistani farmers are paying heavily for ensuring food security in the country. Being an agriculture economy, he said, the Pakistan government should seriously address the genuine problems of the farmers who grow important crops to feed the countrymen, as well as prevent the government from expensive imports.
Farmers are continuously on the receiving end as far as high cost of production is concerned. Fertiliser is an important input for increasing per acre yield. This factor also significantly contributes in the ability of a farmer to earn more, while comparatively improving his profit, he said.
“Due to less production, we will be forced to import huge quantities of costly wheat after a gap of about five years,” they said, adding: “It is unfortunate that our policies always end up serving farmers of other countries. Had we managed our affairs prudently and increase urea production domestically, our farmers would have been in a position due to relatively good levels of production.”