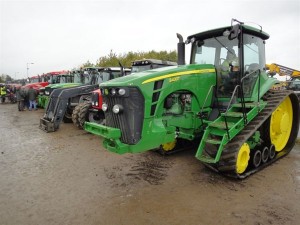 A great entry filled the sale ground in most sections and with one of the biggest crowds in attendance we’ve seen in many a month, the initial signs looked promising. And such favourable indicators did translate into a reasonable sale. For sure, it wasn’t as bullish as our spring sales and was certainly well down compared to November 2012 when the Sudanese trade was almost at its peak and the export trade was generally booming but, considering all the challenging factors we face, it resulted in a more than acceptable outcome.

With one of the best entries of tractors we’ve seen for almost 6 months we had a great selection of all makes and models to suit all pockets and requirements. Tractor Sale 1 strongly featured John Deere with a supporting cast of the usual Masseys, New Holland’s, Case and trade did yo-yo depending on the models on offer. With a strong presence of various Spanish both old and new, we knew the Deeres would soar and in a few cases not only did they soar, they went into orbit…! Good old “Espania” rivalry not only resulted in some retail level prices being paid, but also some steely eyed stares, some bullish snorts as a Spanish Civil War, round 2 almost broke out.! Models in demand were 6820, 6920 etc but interestingly; the 30 series seemed to be fought over with a passion: a 2008 6630 Premium shot past its reserve to reach over £30,000, a brace of 2009 6930 Auto Powers made circa £29,000 and an 2004 6330 Premium sold well for circa £26,500. 6920’s with Quad transmissions averaged just over £21,000. Most expensive tractor was a 12 plate 6170R which topped £57,000 and the gruntiest was a 8430T making just over £60,000.

JCB Fastracs sold as well as ever with most bidding over the internet via i-bidder. Almost all are destined for Poland and more such stock is always invited.

Older Masseys continue to struggle too as reserve prices are still out of kilter with the prices our buyers are able to pay. As mentioned over the last 4 months, the Sudanese trade is a shadow of its former, earlier self yet unfortunately, reserves haven’t been reduced to reflect the prevailing demand.

Probably the biggest crowd of the year gathered for the 11am start in Contractors Plant and representatives from many different countries joined those from the UK in observing a minutes silence before the first Lot was offered. It was a mark of true respect that, even in that environment, you could have heard a pin drop.

A slightly fuller entry of 20 digger loaders filled most of the first row and i-bidder kicked in immediately to ensure the first JCB sold to a new home in Finland. Bidding in the field was more enthusiastic than it had been in the last few months and, although some machines fell slightly short of reserves, over 50% were sold to the UK and South Lebanon as well as Finland. We were missing some Far Eastern buyers, which was unfortunate, as we had several of their type of machines but the Middle Eastern buyers almost made up for their absence. JCB 3CX’s are still the best sellers, particularly Project 12 manuals.

A line up of 70 telescopics started well with a very nice, straight from the user, Manitou MLT 845 built in 2011 and showing just over 4000 hours selling for a very respectable £29500. Over 50% of the rest got away to buyers from Belgium, Germany, Poland, Hungary, Spain, Ireland and the UK. Smaller JCB’s were most in demand follow by Manitous and Claas.

Next in line were the loading shovels where the top price was for a user entered 2004 Caterpillar 950G which is off to South Lebanon with a £27k price tag. Several of the others on offer were sold mainly to Germany and the UK. Larger excavators saw an improved demand although some of the higher valued machines fell just short of their reserves. Three Volvos came under the hammer and they all found new owners making them the most wanted make of the month, with two staying in the UK and one going to France. An absolutely immaculate 1994 Liebherr PR712, again entered by the user, with just 2900 genuine hours and a ripper attached, sold well to a UK buyer for onward shipping into Scandinavia.

Mini diggers were a bit disappointing this month. The rain had become very heavy by the time we got to them and only the most determined of the previously large crowd remained. There is very little trade for older models requiring some fairly major work to bring them up to usable condition but even a nice 2002 JCB 802 failed to get to its’ realistic reserve of £8750. We have customers looking for smaller JCB and Takeuchi’s if you have any for next month. A small entry of dumpers mostly sold as did the skid steers which are mainly bound for the Middle East. Compressors met a multinational demand with buyers from the UAE, Tanzania, Zimbabwe and the Sudan.

Overall, a real improvement as it seemed there were signs of a recovering trade following the disappointing demand of the last few months. With a bigger crowd and more enthusiastic bidding from home and export buyers, especially for the better quality digger loaders, telescopics and excavators we can feel more optimistic about the future and look forward to your entries for December.

A smaller entry than normal in the machinery sections met with a good trade. Of the 13 Rotavators offered, all sold except one, most going to Cyprus with some help from the Lebanon. Good fertiliser spreaders were still in demand mainly going to Eire with some to the Lebanon and others remaining in the UK. Cultivators and small ploughs are also destined for the Middle East as well as the UK, Eire, Finland and France. Better hedgecutters were finding new homes in the UK and Europe along with the more up to date sprayers. In the larger machinery section, trade was a little more selective. Larger plough demand suffered from the absence of some of our mainland European buyers with the top seller being a Gregoire Besson RB7 5 furrow making £2650 with a relatively short distance to travel to its’ new home. Star of this section of the sale was a clean 2009 Breadall K65 trailed spreader which exceeded its £16k reserve by a very long way. Probably due in part to it being winter, there was not a great trade for balers with only a few getting sold. Bale wrappers saw a 100% clearance but there was only two! Six out of the eleven straw choppers on offer succeeded in attracting bidders above their reserve with two Teagle models making £2500 and £2150. These are mainly destined for Northern Ireland and Wales. Some of the trailers sold well but too many narrowly missed their reserve figures and remain with us. As we approach the end of this year and the beginning of the next one, we expect the machinery trade to see its normal revival so it would be good to receive your entries please so we have the supply to meet the anticipated higher demand.

Although grass cutting equipment is not on the top of buying lists at this time of year, good quality machines are always in demand for the next season and this month was no exception with John Deeres once again being sought after; a John Deere 1545 out front mower in excellent condition sold for over reserve at £8400 and a smaller 1600 version sold for reserve at £2800.

The popular engine section of the sale was missing a few of our export buyers but was still well attended with over 55% changing hands. As ever, Perkins, Deutz and Mercedes engines were in demand, good condition 4 and 6 cylinder versions achieved prices of £800 to £1000, with 3cylinder models making around £450.

There was an excellent selection of quality tractor spares available including MF Skid units, cabs, weights etc. Complete MF skid units were achieving around the £1000 figure and are keenly sought after, MF Cabs with good tinwork easily being sold over the £500 mark.