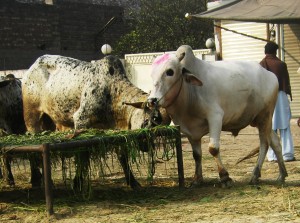 As Eid-ul-Azha is approaching; traders have increased prices of sacrificial animals manifold and making it hard for the citizens to perform one of their main religious duty, revealed a survey conducted by Business Recorder.

A visit to different markets in the twin cities of Rawalpindi/Islamabad revealed that despite sky-rocketing prices, people in large number have thronged to animal markets to buy sacrificial animals.
However, most of them came back just having a look at the animals, as they were of the view that there are ample chances that prices will come down on the last day before Eid. Survey noted that every animal’s price vary depending on health and weight. Sheep was available from Rs 25,000 to Rs 40,000.
Similarly, prices of healthy goats ranged between Rs 12,000 to Rs 25,000. Besides, sheep/goats, rates of bulls and cows are very high which start from Rs 50,000 and in some cases cross Rs 200,000 depending on their health, weight and breed. The traders at the cattle markets also decorate their animals to attract customers.
The Capital Development Authority (CDA) has set up a sacrificial animal market at Sector I-11 to facilitate the residents in purchasing the sacrificial animals, the CDA spokesman said. He said that the animal market was operational from October 3. The contract of animal market was given to a company for Rs 10 million and all the facilities including lights, parking place, sanitation and veterinary doctors were available in the market.
A spokesperson of the City District government Rawalpindi, has established seven sale points for sacrificial animals that includes: KRL Road, New Gulzar-e-Quaid, Chaklala Ground, Bostan Khan Road, Morgah, Dhama Syedan and Chakri Road.
People from different walks of life told Business Recorder that inflation has marred the purchasing power of the masses due to which the sale of sacrificial animals has registered considerable decline. The rates of sacrificial animals have gone out the middle income group reach, they added. Even goat is no more affordable to them to sacrifice individually and they are compelled to perform the Quarbani jointly.
Traders were of the view that prices of each and every item is increasing adding that increase in the cost of animals is reasonable as food expenditure of these animals is also increased like other items with each passing day.
Survey further noted that the exorbitant increase in prices of sacrificial animals has forced the residents of the twin cities to visit nearby villages in search of animals at comparatively low prices.
CDA spokesman said that the authority has chalked-out a comprehensive plan to collect and dispose of entrails, offal and waste material of sacrificial animals from the various parts of the city during the Eid-ul-Azha.
CDA has divided the city into four zones for effective implementation of the action plan, he said. The Authority would also dig as many as 29 deep ditches at 17 different locations in the entire city for proper disposal of offal and other waste.
News Source
Courtesy Daily Times
Tweet